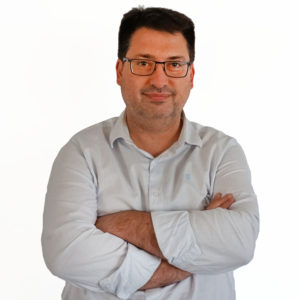 ABOUT ANTONIO
Antonio graduated in Electronics Engineering a long time ago, but he’s now back to uni to study Computer Engineering. His career start had him repairing computers and monitors, continuing with systems administration and microcontroller programming to eventually work as an R+D engineer. Finally, he boarded DigiProces to work in the projects developed by our Technology Center.

Formula 1 is a long-lasting passion for Antonio and one of his most desired dreams is attending someday the Belgian Grand Prix in Spa-Francorchamps. A science fiction fan, Antonio is a devotee of classic writers like Isaac Asimov or Frank Herbert. That’s interesting! But what we want is he coming to the office in his Trekkie costume!